It’s a reality in 2018 that when you’re out driving you will see several people staring at smartphones, paying half attention to the road, and maybe even swerving erratically.

In the age of technology, distracted driving is a major issue for drivers, especially professional drivers who spend most of their time on the road. According to the National Highway Traffic Safety Administration, distracted driving was linked to 3,450 deaths in 2016, making up 9.2% of all motor vehicle related fatalities.

But the impact of distracted driving is likely greater than that. Insurance company Travelers’ latest Risk Index report found that around 23% of Americans say they use personal technology while driving, despite nearly eight in 10 considering the behavior risky. And that behavior extends to the workplace as well, with 43% of U.S. workers saying they engage in work-related communications while driving— not just phone calls, but emails and texts as well.

This happens despite laws in many places making it illegal. For interstate truckers, of course, handheld cell phone use or texting while driving is illegal. But they, too, may be tempted by an incoming text.

Distraction is hardly a new thing, says Chris Hayes, the head of transportation risk control for Travelers. Drivers have been losing focus on the road since long before the first mobile phone, fiddling with the radio, eating behind the wheel, or putting on makeup. But with the mobile technology boom of the last decade, the amount of distraction has increased, and the temptation to use a device like a cell phone has become too great.

Vehicle manufacturers have tried to make it easier for drivers to control many phone functions, putting radio controls on the steering wheel, putting in touch-screen radio systems, and offering voice control of cell phones connected to the car’s stereo system. Currently 16 states prohibit some use of cell phones while driving, so the incentive is there to solve the problem of distraction while staying connected.

Of course, fiddling with the center stack is a distraction as well, and in some cases difficult touch interfaces have actually complicated HVAC and stereo volume control. But Hayes says manufacturers believe it’s still preferable to holding the phone directly in front of you, completely removing your eyes and attention from the road.

For truckers, mobile technology has also entered the cab in a real way in recent years, with navigation devices, fuel-economy coaching gizmos, fleet management/workflow devices, or in-cab fleet tracking/communication systems. And then there’s the recent electronic logging device mandate. So have ELDs increased distraction as well? 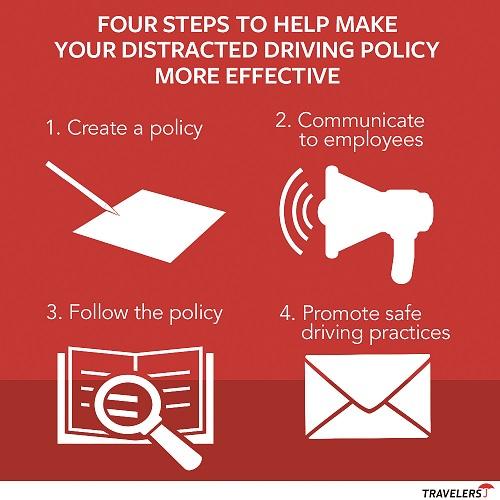 Not really, according to Bob Bringgold, national director of risk control for Northland, a division of Travelers that focuses on heavy-duty trucks. While there hasn’t yet been a formal study to look at whether ELDs increase distraction for truck drivers, he says the device is mostly out of the way for the bulk of a driver’s day.

“For most ELDs, when you shift into first gear, that’s when you go into on-duty status,” says Bringgold. “It doesn’t really require any interaction again until you stop and it’s just logging your time.”

But that doesn’t mean that truckers are less susceptible to distraction. Many new trucks abound with screens and technology similar to those in new passenger cars, whether it’s infotainment or work-related. Tablets and other mobile devices are increasingly a part of how drivers are dispatched and routed.

For anyone running a business, distraction can be a costly and fatal problem.

The number one cause of death on the job in the U.S. is motor vehicle related accidents. But even when it isn’t fatal, it’s extremely expensive. Bringgold says on-the-job vehicle accidents are more than double the cost of any other type of on-the-job accident. “With trucks, not only do you have these horrific crashes, but you also have very expensive damage happening to important assets of the company,” Bringgold says. Not to mention the potential for litigation.

That’s why it’s vital for trucking fleets to implement a safety strategy that includes distracted driving awareness. The training should include an emphasis on defensive driving strategies to avoid problems from other distracted drivers, many of which are common-sense tactics that pre-date the cell phone. This includes driving at safe speeds and being mindful of following distances.

But whatever a fleet’s official policy and training program, it is just as important that fleet managers communicate with drivers regularly about it to drive home the point. Some fleets bring up distracted driving awareness every month at safety meetings. Senior and mid-level management need to buy into it as well, leading by example.

“Set your policy, get your policy in place, and communicate it with people and what your penalties will be. Then follow up again and again to get people to do it— and when you have success, you celebrate it,” says Bringgold. “Successful trucking companies set expectations, enforce it, and reward employees for doing it.”

Northland provides an outline for safety policies on its website, but Bringgold says that in order for a safety policy to be effective, it must be tailored to the type of fleet.

Bringgold says one fleet with a successful program asks drivers to recall the craziest instances of distraction they’ve seen while on the road. This helped make the issue relatable for the drivers and allowed them to get involved in making each other aware of situations they might encounter in the real world.

“The more we talk about it and keep it at the forefront for drivers out there, they’re going to remember the importance of staying alert,” Bringgold says, “because in a lot of cases, it’s not them being distracted, it’s those around them that they have to watch out for.

“There’s a level of experience and professionalism in commercial trucking that is not there in the general public, and relying on their experience and intuition about the drivers around them can keep truckers safe.”