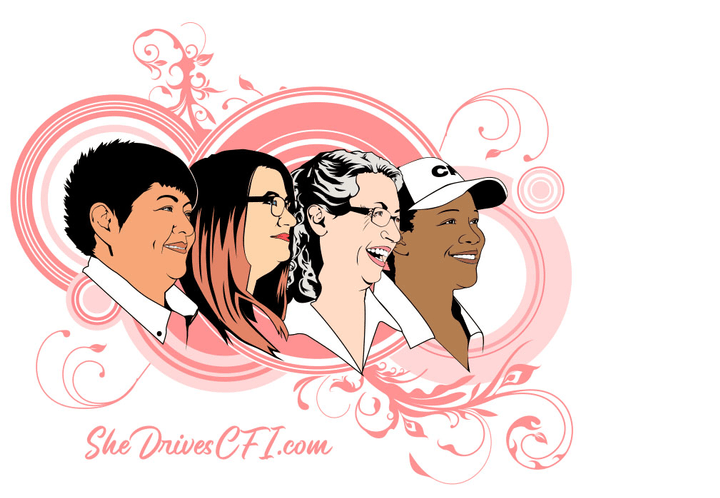 When Stephanie Klang’s then-husband taught her to drive a truck in 1980, allowing her to escape the poverty she grew up in, she never expected that one day her likeness would be one of four women drivers featured on a special CFI tractor.

This month, Joplin, Missouri-based truckload carrier CFI unveiled several custom-designed, large-format truck wraps. While four recognized the company’s military veterans, one was a “She Drives CFI” theme, honoring four of the company’s longest-tenured women drivers. The “She Drives CFI” truck will be a working rig, but will also attend events where it may especially resonate, such as a “Run Like a Girl” 5k race or a Girl Scouts or Women in Trucking event.

Klang may be the most well known, having been one of the few women to be an America’s Road Team captain for the American Trucking Associations as well as through her work with the Women in Trucking organization. When Scott Darling was administrator of the Federal Motor Carrier Administration, WIT organized an educational ride-along with Klang at the wheel.

With 3 million safe miles under her belt, Klang retired earlier this year to spend more time with her second husband and her cats, enjoying Zumba and yoga classes at the Y and some part-time work doing community outreach with CFI.

Trucking out of Poverty

“We have a happy home,” Klang said in an interview with HDT. “One of the reasons I got on the truck in the first place, I did not have a happy home life growing up – I wanted away. I was raised by a single mother on a welfare check, and she worked so hard to make ends meet. Back then in ‘70s, the welfare system just beat you down. I got a job as a high school student making $30 a month, and when social services found out about it, they reduced my mother’s check by $30.”

So she started driving team with her husband in 1980. The two changed jobs about every two years, until in 1987, “we came to CFI and I said, this was it.” Eventually she and her husband parted ways, and in 1995, he took his truck and left, while Klang stayed on and hit the road with her tomcat as a solo driver for CFI. “I traded my husband for a job,” she said, laughing in a CFI video. “It was a good choice.”

The best part about the transition? “I got to do everything my way,” she told HDT. “I loved the fact that I could sleep sitting still. Of course, if anything had to be done, I had to do it, but that was no trouble, if a trailer had to be cleaned up and boards pulled, I could do that. I did learn a lot more about pre trips and inspecting equipment. I chained up a few times. It was a small price to pay for getting to do everything my way.”

In 2006, she married another CFI driver, but they stayed in separate trucks, coordinating their time off at home. “People assumed we would drive team, and I was like, are you kidding me? I’m not sharing this living space!”

As a woman driver, Klang admitted, she did face some sexual harassment, especially when she was younger.

“Some of it was bad, but it never crossed over to physical harassment; it was just words,” she said. “The way I dealt with it was I just acted like I didn’t hear them. They got no reaction.”

Klang recalls in her early 20s walking through warehouses to get to the shipping office to sign papers and enduring catcalls from the warehouse workers. “Then I’d go out to the truck and cry. But you get a tougher skin. I’ve never felt threatened physically. There’s been some stupid men out there. But I think you find stupid men in every field.”

Sometimes she’s had a smart comeback. Klang recalled the time she was driving down I-44 a few miles from home and heard some chatter on the CB as two trucks passed her, along the lines of, “I’d sure like to spend some time with that gal.”

“I couldn’t help it, sometimes I’m witty, and I got on the CB and said, ‘Just get off here and park at my house – I have a whole bunch of yard work to do and we’ll spend some time together!’ And they ran off like scalded dogs. The last thing I heard was, ‘Oh no, that sounds like living in mom’s house, no way.’” 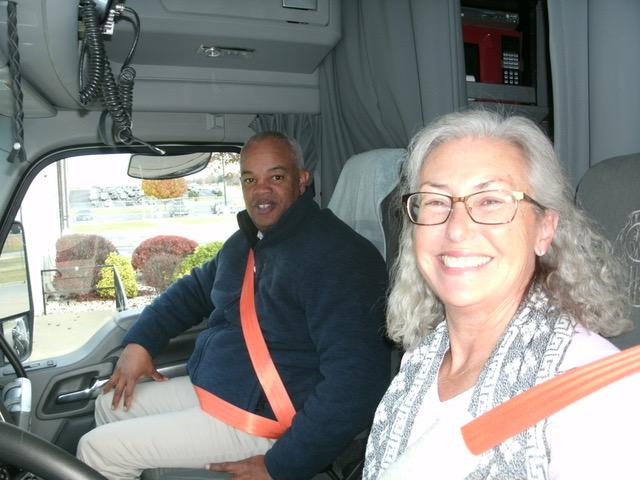 Then-FMCSA Administrator Scott Darling got an education on trucking in a ride-along with Stephanie Klang. Photo courtesy Women in Trucking

When we asked Klang what about CFI makes it a good fit for women drivers, why she’s stayed with the company for so long, she talked about the same types of things that make fleets appealing to any driver. Back in 1987 when she started, they ran legal – no forcing drivers to falsify their logbooks. Reliable equipment keeps you rolling and earning. If you were doing a drop and hook and the trailer had a mechanical issue, she said, they would fix it right away. Good communication. She’s never had a paycheck screw-up in 31 years. “It’s a trucking company, so the miles go up and down, but there was a good average. And when you hit Joplin [CFI headquarters], the people are friendly.”

And, Clang said, CFI is a big supporter of the Women in Trucking association.

They must be doing something right, because out of CFI’s 2,000-driver workforce, 14% are women, which is well above the industry average. WIT/National Transportation Institute research found that women made up 7.89% of over-the-road drivers at the end of 2017.

Trucking has given Klang confidence and independence, helped her discover herself, gotten her out of poverty, paid for her home, and allowed her to help her family. In fact, she told HDT, she finds it pretty ironic that the little girl raised on a welfare check now has a financial advisor to help her invest her money wisely.

“The advice I would tell my younger self is not to sell yourself short,” Klang said. “To believe in myself more, to believe I’m more capable than I thought I was ... because I am.”