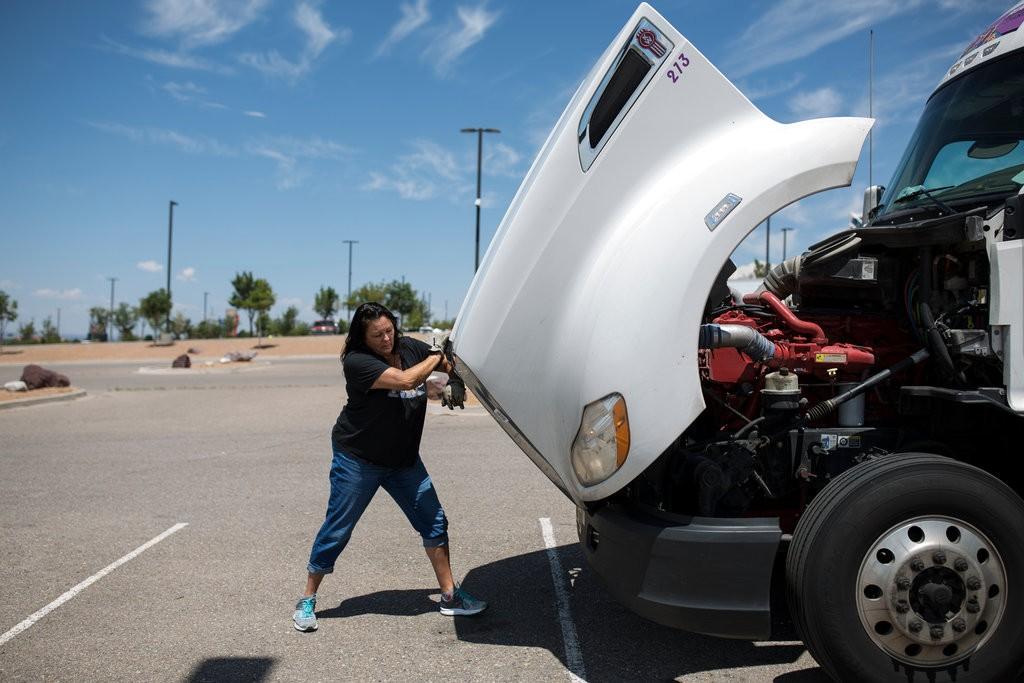 Desiree Wood closes the hood after conducting a safety inspection on her Kenworth truck in Albuquerque. Photo: Adria Malcolm for The New York Times

The economy is booming. The stock market is frothy. Corporations are earning record profits. Yet workers are getting minuscule raises that don’t make up for the rising cost of living.

To understand how this disparity came to be, consider the plight of long-distance truck drivers. They spend weeks away from home, crisscrossing the country to keep store shelves stocked and the economy humming. The trucking industry complains it can’t find enough drivers. And yet the value of drivers’ paychecks just keeps falling over time.

The 1.7 million heavy and tractor-trailer truck drivers in the United States earned an average of $44,500 last year, according to government data. That’s little changed in inflation-adjusted terms over the past several years. Over the past several decades, inflation-adjusted driver pay has fallen sharply. The 1980 census found that the average male driver — virtually all drivers at the time were men — earned roughly $17,400 in 1979, or about $55,500 in 2017 dollars. That pay drop has coincided with drivers working longer hours — 60- to 80-hour weeks are common, drivers and researchers say — because they spend many more idle hours than they used to at warehouses and stores waiting to pick up cargo and make deliveries, time that typically goes unpaid.

Many truck drivers are paid on a per-mile basis, which means that some of them earn less than the federal minimum wage of $7.25 an hour. The economics of trucking can be bleaker still for drivers who are classified as independent contractors. Some even wind up owing trucking companies money because a truck lease, insurance, fuel and other expenses can add up to more than their per-mile reimbursement rate, a phenomenon that Steve Viscelli, a sociologist at the University of Pennsylvania, detailed in his 2016 book “The Big Rig: Trucking and the Decline of the American Dream.”

Dominic Oliveira has firsthand experience with this problem. Mr. Oliveira, 33, spent a little over a year working for New Prime, a trucking company based in Springfield, Mo., in 2013 and 2014, much of that time as an independent contractor. Some weeks he owed the company money after driving more than 1,000 miles. He made so little that he couldn’t always afford rent, and he spent long stretches — six months, at one point — living out of his truck. Mr. Oliveira’s contract said he was free to drive for other trucking companies, but there were numerous conditions that effectively bound him to New Prime. A federal class-action lawsuit Mr. Oliveira filed against the company says that New Prime controlled his schedule and his ability to haul cargo for other companies. To work for other companies, he would have had to reregister his truck and get a newinsurance policy, an arduous undertaking given the long periods he spent on the road. 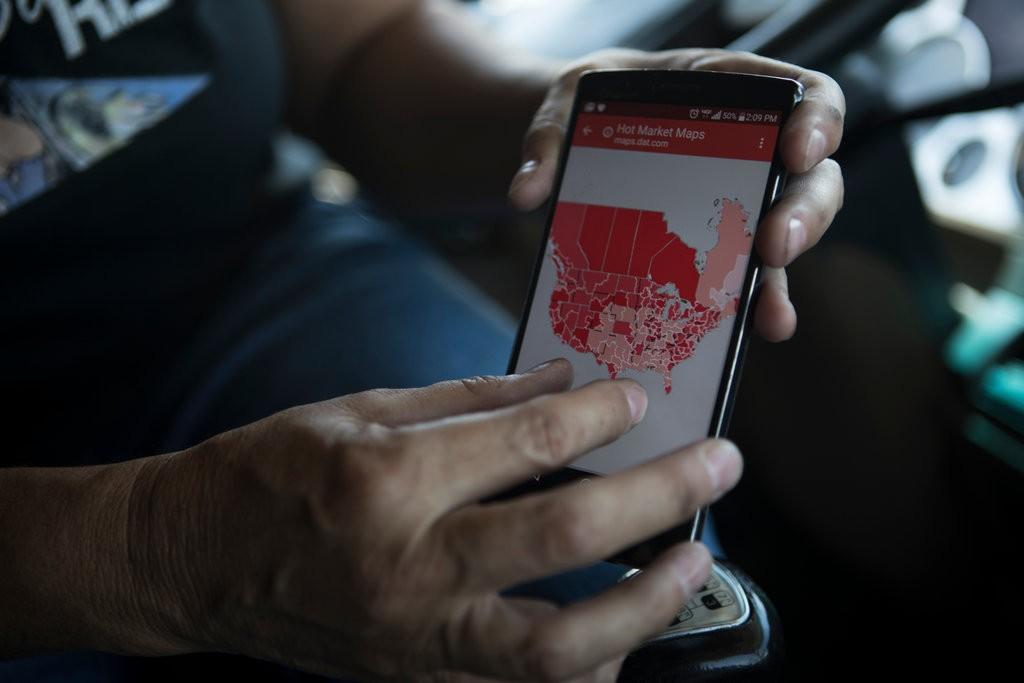 Desiree Wood, who is a one-woman trucking company, uses an app that shows drivers where the pay is best in the United States. Photo: Adria Malcolm for The New York Times

“This is not a glamorous job by any means,” Mr. Oliveira, who now works for a different trucking company, near Memphis, said in a telephone interview. “But if you put the time and effort in, you should be going somewhere. But a lot of us don’t. It’s insane how many friends of mine in the last five years have gotten divorced and lost everything because a company held back their pay, saying they owe them money.”

Mr. Oliveira’s lawsuit seeks back pay for himself and other contractor drivers. The company has sought to have the suit thrown out, arguing that the company’s contract with Mr. Oliveira requires him to submit disputes to arbitration. But a Federal District Court and the United States Court of Appeals in Boston ruled that Mr. Oliveira could bring his case in federal court because the 1925 Federal Arbitration Act exempts transportation workers. New Prime, which declined through its lawyer to comment on Mr. Oliveira’s allegations, has appealed the case to the Supreme Court, which will hear arguments in October.

The American Trucking Associations, citing its own research, claims thatlong-haul drivers with irregular routes can earn more than $53,000 a year. The group adds that many trucking companies offer signing bonuses to try to attract new workers, and that drivers who work for private corporate fleets often earn salaries of more than $86,000 a year. Indeed, drivers who work as employees of companies like Walmart and UPS make a middle-class income, have predictable schedules and enjoy other benefits. Some drivers in the industry, including at UPS, are represented by the Teamsters union. But those drivers are the top echelon of the occupation and are not representative of the hundreds of thousands of people who toil in the industry’s underbelly.

Many long-haul truck drivers work for much smaller companies that pay modest rates — for one eight-day trip in 2013, Mr. Oliveira took home $482.85 for driving 6,156 miles — and few are unionized. These companies typically haul cargo for retailers, manufacturing companies and other businesses on a for-hire basis. They often get called at the last minute to pick up loads and compete intensely on price.

It was not always this way. The federal government began deregulating the trucking industry in the 1970s and 1980s, making it easier for new businesses to haul freight without seeking government approval for new routes. The previous requirements raised the cost of moving goods and stifled competition, but deregulation also took a toll on drivers by giving the industry a bigger financial incentive to lower costs and by weakening unions. 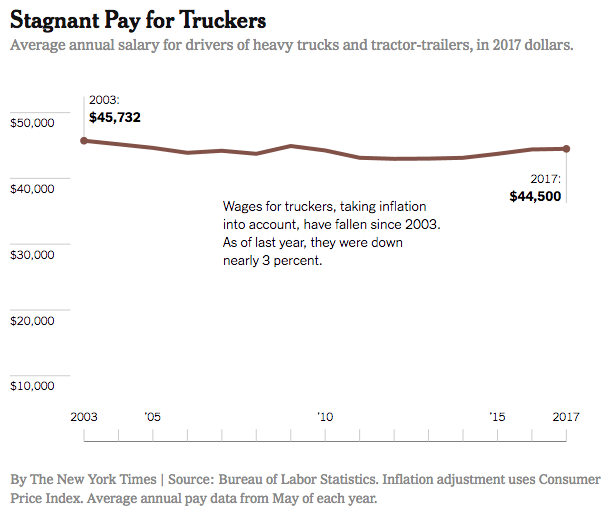 Because driver pay is low, trucking companies in the truckload segment where drivers like Mr. Oliveira work have a turnover rate of about 95 percent, said Stephen Burks, a professor of economics at the University of Minnesota at Morris. (Mr. Burks also once worked as a truck driver.) Fear of recessions — and being stuck with high labor costs — make many companies reluctant to raise wages even if doing so would reduce turnover.

Desiree Wood, a driver who founded the group Real Women in Trucking, said that she once earned as little as 22 cents a mile as a driver for a trucking company in Tennessee. “If everybody is quitting, and they have a labor shortage, it’s probably because it is a crappy job,” she said.

Ms. Wood now has her own one-woman trucking operation and refuses jobs that don’t pay enough for her to break even — her cutoff is about $1.60 per mile. But she said it took her years to figure that out. Many younger people are lured into the profession by promises of bonuses and the freedom to work when they want, only to be disappointed by the reality of a grueling, underpaid job.

Not only is the trucking industry’s low-cost strategy hard on workers, but some experts say it also makes roads less safe by compelling workers to drive when they should rest. After spending many unpaid hours waiting to pick up a load, drivers put in long hours behind the wheel. That’s because it’s the only time they earn money, according to Michael Belzer, an economics professor at Wayne State University and the author of “Sweatshops on Wheels: Winners and Losers in Trucking Deregulation.” Federal regulations prohibit truck drivers from spending more than 11 hours in a 14-hour period behind the wheel. In practice, many work much more than that because nondriving hours are not counted.

If the industry raised wages, it’s clear that employers would find a larger labor pool. Instead, lobbyists for the industry are pushing the Trump administration to lower the minimum age for commercial driver’s licenses to 18 from 21. The administration seems receptive: Last month, the Department of Transportation announced that it wanted to move ahead on a pilot project that would allow 18-year-olds with the military equivalent of a commercial driver’s license to haul freight across state lines.

These are dangerous ideas. Lowering the age requirement could make roads less safe: Studies have consistently shown that teenagers are much more likely to be involved in fatal and other accidents. It makes little sense, then, to encourage younger people to get behind the wheel of a big rig weighing more than 33,000 pounds.

Imagine, however, that the government instead decided to use its prodding power to improve the lives and incomes of truck drivers. Officials could, for example, do more to crack down on companies that misclassify employees as contractors to avoid paying for expenses and guaranteeing a minimum wage. The government also ought to require that trucking companies and freight customers compensate drivers for every hour of work, including the hours spent picking up and dropping off loads. What’s more, Congress could pass a law making clear that regardless of how the industry pays drivers — whether on a per-hour or a per-mile basis — drivers are entitled to earn minimum wage and overtime for all of the hours they put in. 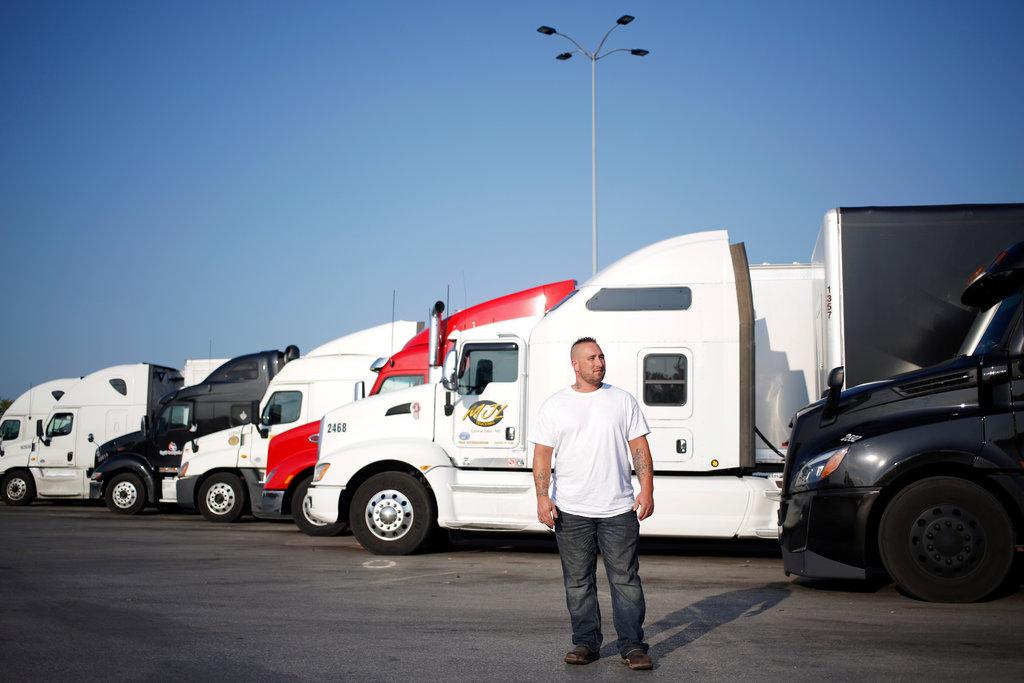 Dominic Oliveira says as a truck driver, he sometimes incurred more expenses than he was paid to make deliveries. Photo: Luke Sharrett for The New York Times

Such changes would increase costs for trucking companies, their customers and, ultimately, American shoppers. But paying truck drivers a living wage would neither imperil the economy nor cause spiraling inflation — the costs would be spread among the billions of tons of freightmoved by truck each year.

Eventually, self-driving trucks might make these problems irrelevant by replacing drivers altogether. But experts agree that drivers will still be needed for many years. Computers will not be able to navigate all driving conditions, nor can they perform other job functions, like loading and unloading cargo. The trials for drivers aren’t going away for the foreseeable future.

Despite the bleak economics of their chosen occupation, many drivers don’t want to quit trucking. They are loath to trade in the cab of a big rig, and all the autonomy it offers, for an office cubicle or a factory floor. And they like seeing places that they may never have traveled to otherwise.

They also are increasingly frustrated that they are not fairly compensated for their work.

“I love what I do,” Mr. Oliveira said, “but there needs to be change in the industry for the next generation.”


What Does a Truck Driver Look Like?Trucking Out of Poverty: Women on the Road